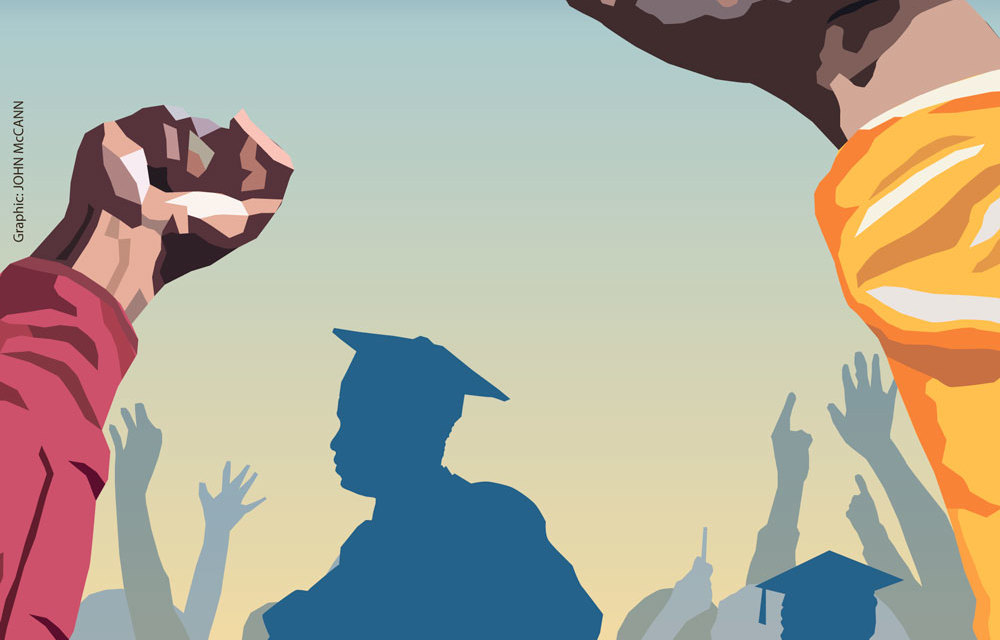 A year ago, South Africa went to the polls and won the decisive victory of President Cyril Ramaphosa, whose government emerged from the Jacob Zuma era characterized by destructive corruption and unrest. Markets recovered, consumer confidence rose and South Africans breathed a collective sigh of relief, despite many societal challenges. In an unexpected turn, the global coronavirus pandemic emerged as the defining international crisis of a generation, ravaging the global economy, disrupting trade relations and radically altering daily life.

Ramaphosa’s government has shown commendable leadership in response to the crisis and implemented a massive R500 billion stimulus package. The president also signaled the urgency to restructure the economy in a more just and equitable way, without specifying how his message would translate into politics.

The energetic dynamism needed to rebuild South Africa as a strong regional power rests on an educated and versatile workforce and this cannot be achieved if our young people are caught in a deadly embrace. Urgent economic aid and recovery must also include the unconditional cancellation of student debt held by national banks and move towards a debt-free education framework.

The costs have never gone down, the transformation is at a standstill

In order to move towards a more equitable and just society, we need to envision one that gives our people the tools to do so, and that starts with debt-free education and skills development.

Five years ago, the campus movements in South African educational institutions mobilized thousands of people in a protest collective known as the #FeesMustFall. It was a national call to abolish tuition fees and the student debt model for funding gaps caused by budget cuts in education. The movements also denounced a lack of transformation in institutions such as Stellenbosch University, which subsequently produced an appalling, discredited article analyzing “poorly cognitive functioning in women of color”. Unfortunately, the effectiveness of the Fees Must Fall movement fizzled out and higher education continued on the path of commodification, in a highly financialized macroeconomics.

The collective talent of a diverse generation of entrepreneurs, artisans and would-be caregivers has been unreasonably chained to years of debt repayment to our engorged national banks, instead of saving for personal investments. The same banks currently the target of legitimate criticism for not doing what they promised to help vulnerable businesses and families during the pandemic. If you are lucky enough to get a better paying job in the city, the wrath of a class of unregulated, monopoly landlords will draw the rest of your savings from rising rent prices – beyond reasonable measure. . In the 2010s, the struggle to reclaim the city and implement affordable housing programs was vehemently fought by cities ruled by the Democratic Alliance, and tacitly permitted by a national ANC government ( with the exception of some vocal ministers such as Lindiwe Sisulu) who turned a blind eye. .

The assault on the finances of working-age South Africans is inhibiting our ability to build a robust African economic power and, therefore, I predict that we will see sluggish growth for the foreseeable future.

The benefits of cancellation

Our big national banks must rise to the occasion and do more than espouse the empty slogans of public relations campaigns promising “to be there for you during Covid-19”. Debt cancellation can be easily absorbed by our national banks, which remain among the most capitalized and positive financial institutions in the world. South Africans are now witnessing the first of many international disasters to come, in a future that will be defined by the consequences of unchecked climate change. The economic consequences of this pandemic will lead to business closures, illegal evictions and defaults, including the problem of preventable student debt. Our new economic model must adopt unconventional measures to stimulate economic activity.

Critics and other fundamentalists of the free market fail to understand that markets are enabled by regulatory practice and embedded in the legal apparatus of states. Funding high quality tuition fees, free or affordable higher education is in fact a wise investment in the competitiveness of our labor market. A strategic public-private partnership could help leverage the appeal of graduating with English as the language of instruction, for a growing untapped market of wealthy international students.

An affordable alternative to the rising cost of studying in Australia, the UK and other countries that have taken this approach. Investing in our institutions as desirable places of study can generate new sources of income for our higher education institutions, opening avenues to subsidize tuition fees for disadvantaged students nationally.

Meritocracy, if you can afford it

It has often been said that talent is distributed, but not opportunities. Opposition to student debt cancellation is often claimed to violate liberal democratic values ​​of fairness and meritocracy. Debt cancellation is seen as unfair to borrowers who have vowed to repay their debt. The mantra – “If I have suffered, then you should too!” – is not a valid argument against the cancellation of the debt. The mythology of meritocracy has been institutionalized, allowing the privileged to believe that historical racial economic inequalities are irrelevant to contemporary social outcomes, including who attends, completes, and flourishes after graduation.

In a country where inequalities and poverty are enormous, it is politically appropriate to blame individuals for not repaying their debts rather than assessing the structural inequalities that affect payment terms. Much research has linked racialized socio-economic inequalities to a higher number of dependents dependent on black graduates. This phenomenon is commonly called “Black tax” and ignore the burden of the escalating cost of living that all South Africans face.

Ultimately, poorer students graduate with higher levels of debt and face greater hurdles in paying them off, which is neither fair nor indicative of merit. Moralistic or political demagoguery about who deserves or does not deserve debt relief will only weaken efforts to achieve our democratic ambitions. We should do all we can to expand opportunities and promote productive economic behavior above the normalized extractive economic orthodoxy of neoliberalism over the past 40 years.

South Africa should look no further than the United States where student debt has metastasized into a crisis. The psychological and material burden of student debt has been linked to the delay of young Americans in starting families, buying homes, starting businesses, and participating in other productive economic activities. Meanwhile, UK Labor is calling for a return to a need-based grant system and Germany abolished tuition fees in 2014. If vibrant, wealthy industrialized nations with robust labor markets have caved in under the burden of debt, so why is South Africa stepping on the same plank?

The main aversion to free education is ideological and ignores the historical makeup of South Africa. Debt cancellation is a rational and strategic investment in our country’s workforce that must be empowered to meet the severe challenges presented by a post-pandemic world facing ecological disaster. To solve the daunting challenges of skills shortages and unemployment, debt-free higher education must be on the economic agenda. Brighter minds are needed to work on the design of financial instruments and the development of new resilient industries for a future “green” economy needed to avoid rushing to the proverbial cliff edge.

This is our opportunity as South Africans to turn our backs on self-interest and greed, and move towards a society centered on social security and sustainable development. Let’s start by canceling student debt.