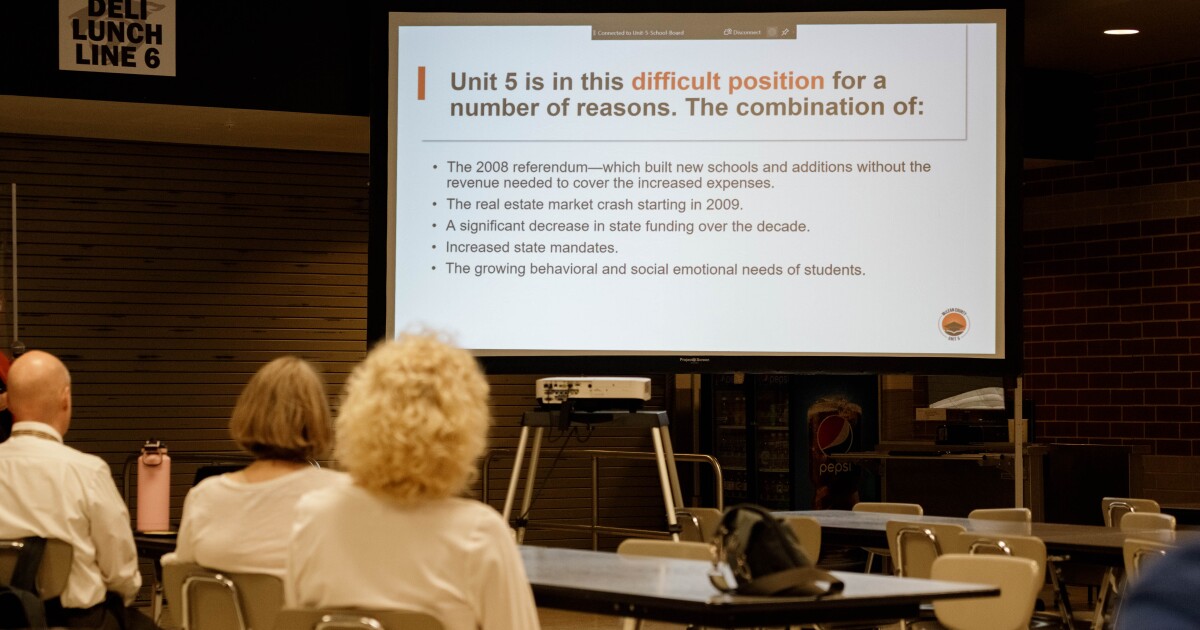 A virtual public briefing on Unit 5’s financial crisis and the possibility of addressing it could include calling for a referendum on higher taxes, drew around 200 attendees on Monday night.

The meeting followed in-person versions of the same presentation held Saturday and Monday at Unit 5 schools. The district faces a projected shortfall of $26 million over the next five years.

Ed Sullivan, a consultant working with Unit 5, told the Zoom audience that district leaders are in the early stages of researching how the community wants to respond to the deficit.

He said his company was tasked with getting a wide range of feedback and developing a plan over the next few months.

Unit 5 knows its students and district leaders know the challenges ahead, Sullivan said. But the six-month community engagement process aims to bring more voices to the table — whether it’s residents who have students enrolled in Unit 5 or not.

The Normal-based district covers more than 200 square miles and has ratepayers in parts of Bloomington, all of Carlock, Hudson, Normal, and Towanda, as well as several rural areas.

“It’s very important to them (the leaders of Unit 5) to involve the community and have a say in what’s going on,” said Sullivan, who spent more than a decade as a as a state legislator representing the 51st district.

In February, the school board agreed to a $70,000 contract with EO Sullivan, its Libertyville-based consulting firm, to engage the community and help determine a referendum recommendation.

School leaders discussed this possibility, but did not make a decision on whether to hold a referendum.

Currently in the first of four phases, Sullivan said the process is at the idea stage and is looking for “broad information gathering,” adding that he will update the school board at its May 11 meeting.

Later phases will narrow ideas and include more public meetings, as well as telephone surveys, he said. In August, he will present a final plan based on the information and data collected.

During the first hour of the meeting, Superintendent Kristen Weikle described the strengths of Unit 5 and a history of the causes of the difficult financial situation.

In the remaining half hour, she answered a dozen questions from the online chat. Topics ranged from the district’s administrator-to-student ratio, to why the state doesn’t pay more at Unit 5, to how the district decides which teaching positions to eliminate.

With 13,000 students enrolled, Unit 5 is among the 20 largest of more than 800 school districts in Illinois.

Weikle said Unit 5 struggled to meet the needs of this growing district, with a school tax rate that’s been fairly stable since the early 1980s. It’s currently $2.72 per $100. equalized assessed valuation, only 10 cents more than in 1983.

“Our limited funding is really catching up with us,” Weikle said.

She told the virtual audience that the growth of Unit 5 led to new schools and additions about 25 years ago. But a slump in the real estate market soon after resulted in lower property tax revenues. Meanwhile, the state has increased the warrants required while providing less funding, she said.

The district has worked to fill budget shortfalls, she said, but the past two years have been disrupted by the COVID pandemic, she added.

Over the past seven years, Unit 5 has cut spending by $5 million, she said. But it’s far from enough to make ends meet. The school board has issued general obligation bonds in recent years to support the district, but leaders say that approach is unsustainable.

If the district doesn’t find ways to generate more revenue, changes will come, she said — programs will be cut, class sizes will increase. Shorter school days are also a possibility, to ensure teachers’ planning time.

Throughout the session, Weikle reminded attendees to click the in-chat link to a feedback form. The data collected from these surveys will help determine the final plan presented by Sullivan, he said.

Syrah Resources can get up to $107 million in U.S. ‘clean energy’ loan for Vidalia plant – Mississippi’s Best Community Newspaper

9 best shopping apps to save money