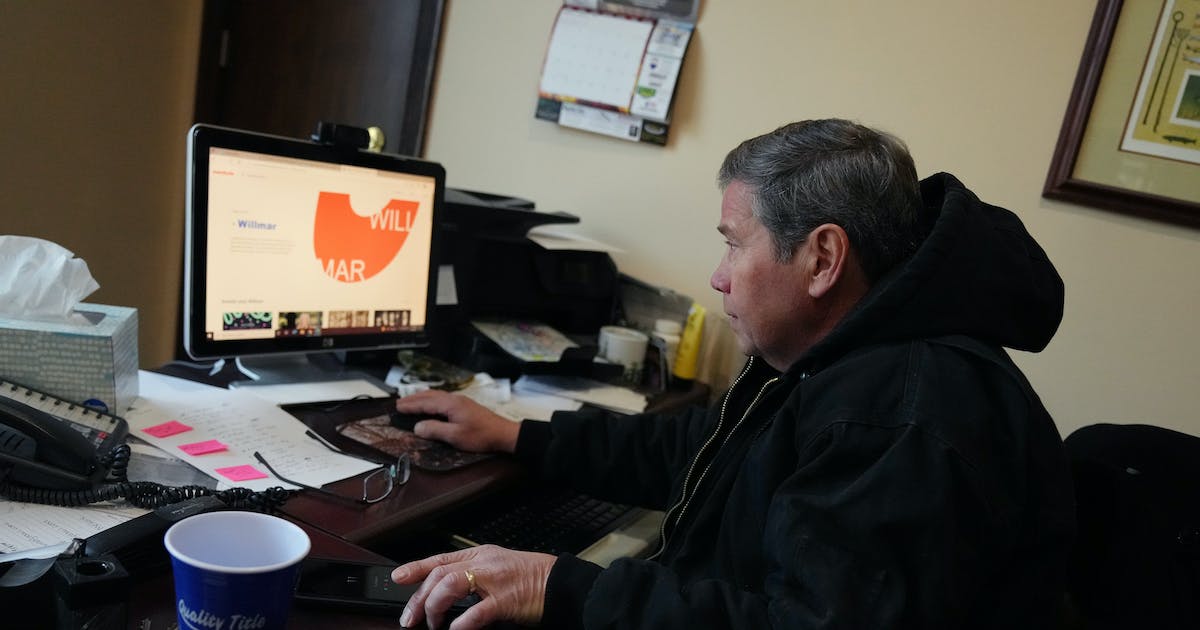 The meal distributors in question have a history of legal issues

The owners of several businesses at the center of an FBI probe into a fraud involving meals for the poor have received tens of millions of dollars in taxpayer money despite a history of criminal and financial trouble.

At least two of the people who investigators say benefited from the scheme involving the non-profit group Feeding Our Future have been convicted of theft. A man, at the time he reportedly received more than $600,000 in program funds, was on probation for theft from a Burnsville pharmacy. Another was nearly six figures in debt to the IRS.

The problems went unnoticed in part because neither the state of Minnesota, which provided the federal money, nor Feeding Our Future, which sponsored the companies, conducted background checks.

Feeding Our Future director Aimee Bock defended her organization’s decision not to review the backgrounds of its contractors.

“Remember, one of the reasons Feeding our Future has been successful is that we keep federal dollars in the local community,” Bock said in an email. “A lot of young black men in our state have records, but when given a chance, they’ve shown that their past doesn’t define their future or even their present.”

The Star Tribune attempted to interview 17 people accused of fraud by the FBI in search warrant applications made public last month. One declined to comment and most did not respond to calls, emails or letters.

Instead of using the money to buy food for the children, according to FBI search warrants, the owners continued to spend lavishly, buying luxury vehicles, lakefront real estate, jewelry, cyber-currency and other goods in the United States and abroad.

So far, no one has been criminally charged.

Although Bock said she had never seen evidence of fraud among her contractors, she admitted in a recent email that she had terminated Empire’s contract in 2021 at one of her sites due to concerns about “poor service delivery”.

Bock’s attorney, Kenneth Udoibok, said Feeding our Future did not conduct any background checks on any of its partners, saying such checks would “kill a lot of big organizations” because arrest rates and incarceration “are so much higher for African Americans and Latinos.” He added that the Minnesota Department of Education (MDE), which administers the federal curriculum, does not “provide any guidance or information regarding this topic.”

MDE officials said background checks were not part of the sponsor or site application process outlined by the federal program. However, the agency said it was checking whether the contractor’s sponsor – Bock in this case – had been disqualified from participating in US Department of Agriculture food programs.

Udoibok said Feeding Our Future could have been guilty of “racial discrimination” if it had excluded applicants with criminal records. He said the legal issues uncovered by the Star Tribune do not show the organization made a mistake, saying it is unlikely Feeding Our Future “would have done anything differently”.

Bock herself filed for bankruptcy with her ex-husband in 2013, which she attributed to medical debt.

When the owners of the Safari restaurant in Minneapolis first asked state officials to fund their efforts to serve meals to poor children in April 2020, MDE said no, citing the restaurant’s lack of track record.

Feeding Our Future immediately appealed, according to court records.

In an email to MDE, Bock said the refusal was shocking given Safari’s “great work” in providing culturally relevant food to children of color during the pandemic.

Two days later, MDE backtracked and approved Safari’s request. Within three months, Safari claimed to serve breakfast and lunch to 5,000 children a day at its restaurant on E. Lake Street, according to the warrants. The company quickly expanded its role in the food program, partnering with other businesses to seek reimbursement for meals served in St. Paul, Willmar and other cities.

Some of the people running these companies have had trouble with the criminal justice system.

Salim Said, one of Safari’s owners, was convicted in 2011 of fraud, theft and forgery in Indiana after police said he used a stranger’s stolen debit card information to spend $1,040 in laptops at Walmart, court records show.

Ahmed Ghedi, co-owner of a business that claimed to serve meals in St. Paul as part of the Safari network, pleaded guilty in 2020 to a felony charge of receiving stolen property in 2017. Authorities say he drove a man from a Burnsville drug store after the man stole $1,223 worth of pills, including opioids. Ghedi was sentenced to three years probation.

Ahmed Artan, whose business claimed to serve up to 2,000 meals a day to Willmar children, was charged last fall with felony domestic assault by strangulation in a dispute with his ex-wife, court records show. . Artan claimed in court papers that she was the one who assaulted him and recently pleaded not guilty.

Artan’s company, Stigma-Free International, received more than $6.5 million from the program, according to the FBI.

“Most of the money was transferred to entities controlled by individuals associated with Safari Restaurant,” the search warrants say.

According to the Department of Education, Stigma-Free has received permission to operate its meals program from a building on 4th Street SW in downtown Willmar. But the property’s owner, Tom Amberg, told the Star Tribune that he had never rented it to Stigma-Free and had never heard of the company.

Bock countered that Stigma-Free eventually chose another site around the corner and informed MDE of the change. But the department never approved that site, records show. Bock said Feeding Our Future staff visited the Willmar site three times and found nothing of concern.

In total, Safari earned more than $15 million in program money between 2020 and 2021, but “little of that money” was spent on food, according to the FBI. Artan personally received $779,666 while Ghedi shared at least $2.1 million, according to search warrants.

“I am confident now, after reviewing what we can deduce to be the [FBI’s] allegations that Mr. Artan has committed no crime,” his attorney, Barry Edwards, said in an email. “I hope the U.S. Attorney sees the errors in his assumptions before making a charging decision wrong. If not, we are confident that we will win in court.”

Like many Feeding Our Future contractors, the growth of Empire’s meals program has been meteoric. The company was started by Abdiaziz Farah in April 2020, shortly after the pandemic forced Minnesota Governor Tim Walz to declare a state of emergency. The company soon created a network of other vendors who claimed to serve more than 160,000 meals a day at 25 Minnesota locations, according to the FBI.

The IRS filed a tax lien against Farah in 2018 for $89,516 which was released in August 2021. The grocery store faced its own financial troubles last year: the state levied a tax lien of 3 $419 against the company in June 2021 which was released two months later. , and American Express won a $15,846 judgment against the grocery store and Farah’s co-owner in July, which was settled after a month.

The FBI alleges that one of Empire’s busiest sites operated at 1506 Southcross Drive in Burnsville, where the company said more than 50,000 meals were served in November 2021. But a federal agent monitored the site the day before Thanksgiving and saw “no activity”. The officer also found no evidence of meals being served on multiple days in December.

Hussein Mohammed, an employee of nearby Super Gas USA, said he saw many people passing by last summer and noticed empty crates in the trash after food was handed out. But he noted that traffic has dropped significantly over the past four months.

Karen Sauer, a mother of four, says she was practically filling the trunk of her car with groceries when she started going to the Southcross site last spring: chicken, beef, bread, fresh vegetables, dried goods. By midsummer, the site was giving him between a quarter and a half of his usual lot; there was “no quality meat and the produce was rotten so I stopped going,” she said.

Bock said through her lawyer that she has not reimbursed Empire for meals since June 2021. “Ms. Bock visited the site and was very upset with the quality of the food,” Udoibok said.

According to the FBI, $11.1 million of the $16 million received by Empire or its subsidiaries was embezzled. Farah reportedly used $29,000 of the funds to buy a Porsche and $575,000 to buy Savage a house. Officers alleged that his partner, Abdimajid Mohamed Nur, spent more than $1 million in program funds on two undeveloped lots near the shore of Prior Lake.

Like the other main operators in the alleged conspiracy, S&S Catering set up a network of sites they said fed more than 10,000 children a day in Minneapolis and St. Paul, according to the FBI.

The company was started in 2018 by Qamar Ahmed Hassan and operates out of a modest storefront on E. Lake Street in Minneapolis. The FBI said S&S claimed to supply food to three catering sites, one of which would operate in an apartment building and serve some 5,000 children a day, more than Wayzata High School. MDE attempted to block this site but then dropped its opposition.

Hassan and the owners of the three S&S Catering contractors were the main beneficiaries, according to the FBI. Hassan used $505,000 in program money to buy an apartment in Kenya, and she and the owner of an S&S contractor, Academy for Youth Excellence, used $2.5 million in program money to buy the S&S Catering home on E. Lake Street plus two adjacent buildings, according to the FBI.

How much are student loan repayments?