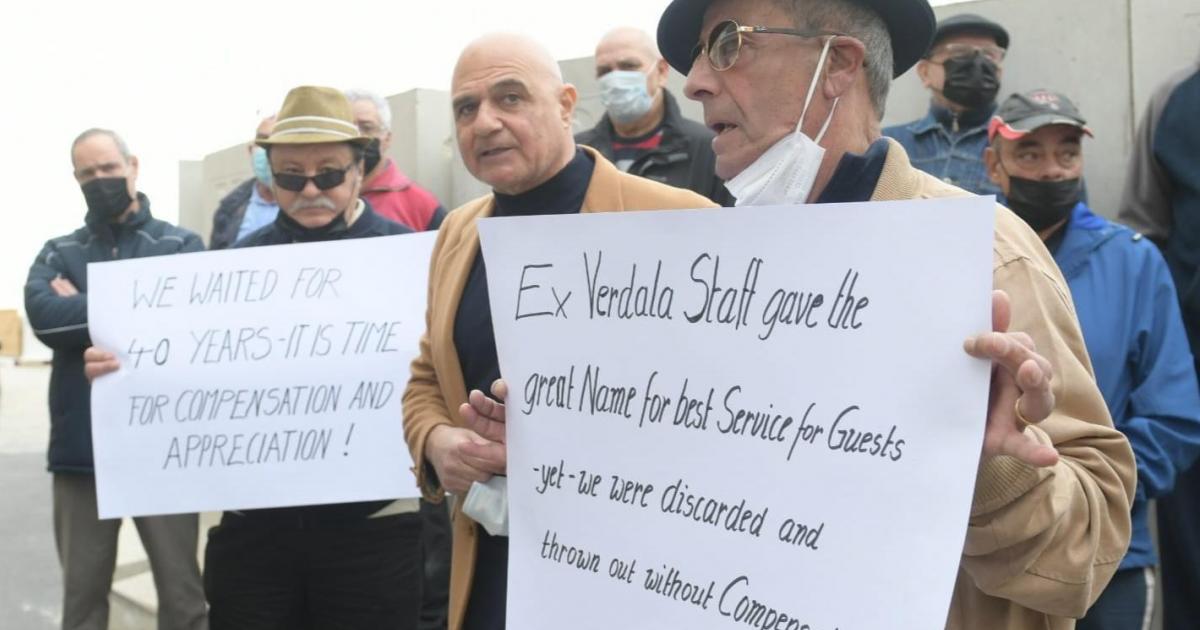 Former employees of the Grand Hotel Verdala in Rabat gathered on Wednesday at the site where the majestic five-star hotel once stood and demanded payment of arrears owed to them for 40 years – since the hotel closed in December 1982.

Antonio Tabone, now 72, was 33 when he showed up to work at the hotel – where he had worked for 12 years, since it opened before it closed abruptly for problems financial.

â€œIt was the best hotel in Malta. Working there was amazing and we were like family. . . We offered the best service but we were completely ignored. We were told to leave without receiving the final benefits due to us. It is time for justice and to get what is rightfully ours, â€said the former janitor.

He said that one fine day – December 20, almost exactly 40 years ago – staff who showed up for work were asked to return home as the hotel closed. There was no warning.

“We were still owed a few weeks’ salary and we never received any severance pay,” said Tabone, who hosted the press conference on Wednesday morning. â€œWe are here today to mark the 40th anniversary of the closure of the hotel. Celebrate these golden years and ask for what is rightfully ours, â€he said.

Several former employees recalled those old days. â€œThey were employing the best when they opened the hotel and we were among them,â€ Valletta said as his colleague Gejtu Farrugia added: â€œThen one day I showed up for my 4pm shift and we m ‘said to report to reception where I was told to go home. “

The chambermaids Doris, Nancy and Joyce recalled how prestigious it was to work at this hotel which has attracted various celebrities including Raffaella Carra, Roger Moore and Sean Connery.

Noel Farrugia, a former Labor minister of agriculture who was previously the workers’ union delegate, said it was time for the political and labor community to honor and appreciate the rights of workers who had worked hard and had to layoff arrears in line with their collective agreement.

Former employees said previous efforts to get their money had been unsuccessful. They seemed reluctant to say who they were asking for the money from.

Situated on a ridge – across Inguanez, ir-RgÄ§ajja, San Bastjan, and Santa Katerina streets – the hotel had dramatically altered Rabat’s skyline when it opened in 1971 as a five-star, 160-room hotel. It ceased operations 12 years later. It was originally intended for redevelopment by construction tycoon Angelo Xuereb – via AX Holdings – who paid 6.5 million euros (2.75 million Lm) for the site in 1994 after winning a tender government, and was granted a full development permit in 2000.

Initially, the planned project was to include an 18-hole golf course extending into the valley, a proposal that sparked much controversy and opposition from environmentalists before ultimately being rejected by the Planning Authority.

The AX Group says it is not responsible

The AX Group, in reaction to the protest of the employees who worked in the hotel between 1971 and 1982, declared that it was in no way involved in the operations of the Verdala hotel during these years.

Furthermore, when the AX Group acquired the buildings in question in 1997, it did not assume any of the responsibilities of the former owners or operators of the building.

“Any claims for compensation raised by former employees of the Verdala Hotel should be resolved by the owners or operators at the time or by the Malta Development Corporation or its assigns, as the case may be,” the group said.

Independent journalism costs money. Times of Malta support for the price of a coffee.