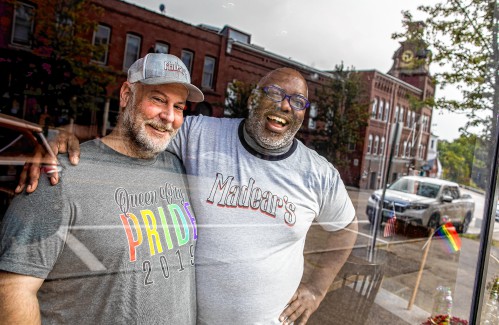 Madear’s Southern Eatery and Bakery, which once served generous portions of crayfish, croissants and liberal causes, created a buzz in Pembroke when it opened in October last year.

One owner, Robb Curry, brought his kitchen from Baton Rouge north, while the other owner, Granite Stater native Kyle Davis, provided baked goods, mixing the two styles in an alliance few had. known.

But while the idea seemed to work, especially on weekend evenings, the owners recently announced in a note to their clients that a financial snafu – created because the two had tried to keep their own books – had them. forced to close, adding that they needed $ 70,000 to get back on their feet.

Some of that money is owed to the New Hampshire Department of Revenue, and the owners are hoping the public will help foot the bill.

Meanwhile, no specific reason for the error was cited in the post, and neither Davis nor Curry could be reached for comment.

The memo read in part: “There is not a single person in charge of financial accounting. We thought we could manage it internally, but in light of recent events we fully understand our limitations and will be hiring an accountant who has experience in catering in New Hampshire.

The message went on to say that the couple would also hire a lawyer to represent them in talks with the Revenue Ministry.

“Before, we relied on the help of family members,” the memo continues. “There were too many cooks in the kitchen and a lack of communication. ”

The state’s Department of Revenue website lists 19 businesses in Pembroke on its Granite Tax Connect page, which means these establishments have an active meal and rental license.

“It means one of two things,” said Carollynn Lear, deputy commissioner of the ministry. “That they were never licensed to operate a restaurant in the state, or it could mean that they were licensed at some point and that was revoked or that they returned it and said that they no longer worked. “

Lear would not specifically comment on Madear’s status. However, the company and its business name are still active and in good standing with the Office of the Secretary of State.

Curry, who is black, and Davis, who is white, added spice to Main Street in downtown Suncook 13 months ago. Their establishment did more than just serve food.

They are longtime partners who promoted inclusion, acceptance, and progressive ideals to create a liberal stronghold that included a rally, with Democratic lawmakers, at their restaurant last May to lobby for a higher minimum wage.

With the opening of their business during the pandemic, Curry and Davis have become news billboards in three ways: economically, politically and culturally.

“We face social justice issues in our day to day lives, raising two kids and opening a business and trying to run it in New Hampshire,” Davis said six months ago at the Minimum Wage Rally.

They moved to Manchester and opened a restaurant there, having run an establishment that combined a catering service with a bakery in Boston for seven years.

Then they moved to Pembroke, citing the need for more space. In their recent memo, Davis and Curry apparently responded to those who had questioned their reasons for leaving Manchester.

“First of all, we want to make everyone understand that we left Manchester (although we didn’t want to) not because of our initial financial accounting problems,” it reads, “but because we needed more space to grow, parking, greater visibility on the main street.

This time, the owners say, they have moved quickly to disclose information in the name of liability and to speak directly to their customers.

Curry and Davis didn’t go that far in their post, however, giving no specific details that would explain the sudden decision to shut down. The restaurant had a strong fan base, which is why the news that it was shutting down due to financial issues was so strange.

They said money was needed to pay the state, renew their liquor licenses and make improvements, including streamlining their menu to address employee shortages, and amenities such as an oven. convection, full size frozen daiquiri maker, beer cooler and refrigerated bakery display case up front.

“We have to share something with you that is really difficult for us to do,” said their memo, addressed to “Madear’s family”.

“We messed up and it’s a pretty big mess. We wondered how it went like that?